We walk under the scorching sun for two hours, in and out of the pine groves where old hippies live in old trucks, not knowing where we’re going except for the fact that we’re moving North. We’re looking for a place to escape the crowded August of the island.
At the end of the forest, we come to a clearing on the cliff. I realize that we can’t hear the cicadas anymore, just the sea against the rocks, and our shoes against the ground. The sun is a physical presence upon us.
The tower stands 500 meters away. I’d seen it as a kid, when my mother used to take my brother and I on long adventures on the cliffs, but this time is different.
I feel its presence. I feel nature around me. The smell of the trees, which is the first thing that I notice when I get here, the first thing that I miss when I’m gone. The three southernmost Illas, watching us silently from afar. 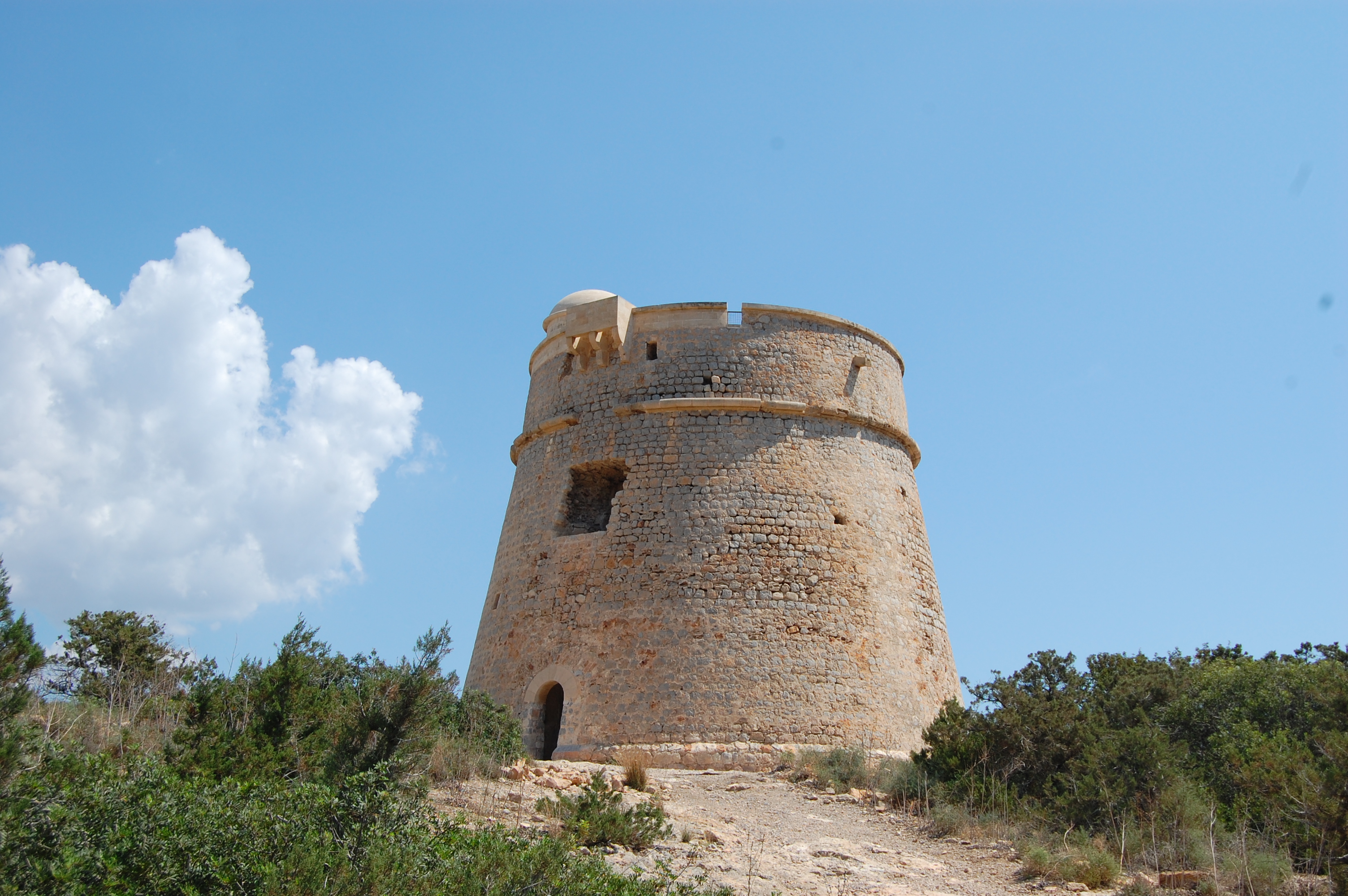 We’re now on a quest. See them all, complete the circle around the Island, and claim its most intimate knowledge as ours.
We go near Eivissa, floating above the parties, and the crowds, and the cars, and the hotels that were made to resemble Miami. The tower is a touristic site, guarded by a man with sad eyes. We climb at the top, look down at the beach.
This place has taught me that everything is dual. The sky and the sea. The chaos of the day and the silence of the night. The rush of humanity and the peace below the water. The true nature of this island lies in accepting the duality as a whole.

We walk for one minute on a well-kept dirt road, there’s a house built so far over the cliff that it looks like it’s about to dive in the foam below. The easiest conquest so far.
There was a ladder to access the tower, long ago. Soldiers would retract it when under attack, even though not a single enemy was ever seen off the coasts of the Island since the towers were built.
We try to climb in, but the door is locked and rusty. It’s more like a gentle request to not get in, rather than a prohibition.
I turn my head, and see an island on the sea in front of us. Quiet. Covered in trees. Treasures are probably hidden in every corner of it, buried by some old pirate in the 1600s. Looking it up, I find out that the island is owned by a politician, he built a resort for celebrities on the side that we cannot see from the coast. Duality.

The northernmost point of the island. I go aroud the perimeter of the tower, assessing the damage, the imminent collapse. But the tower stands, for now. It stands, forgotten by most, hidden by the forest, surrounded by civilization. The missing stone bricks make a perfect ladder to get inside, but we are afraid that the tower may not tolerate visitors.

From the northwestern town of San Miguel, we drive atop a low mountain. “At what point does a hill become a mountain?”
The road goes from asphalt to dirt, then from dirt to mud, then from mud to rocks and trees, until our car is about to roll over. We hear dogs barking nearby, someone must be living on the cliff, like in Cala Conta. We go up, take in the scenery. A lone lizard comes to us to say hi.
The tower stands guard over the port of San Miguel, far below us.

At the back of the beach there are sand dunes, covered in sea daffodils and rosemary. Each step ends up twenty centimeters lower than you’d expect, swallowed by the soft ground. I am hypnotized as the daffodils slowly go by. We sweat our way to the rocks at the end of the beach. As the sun rises from the Mediterranean to our left, the tower sits solemnly in the distance. I feel the wind coming from the land.
Four stories high, the biggest one. At one point in time, this tower hosted eight military men, with cannons, bullets, guns, and food to last months. Once you got in, there was no reason to get out and abandon its safety.
We dive in the crystal clear water for a while. Only one left.

My mind palace, my home, my dream, my safe harbor. The tower stands below us. We see Es Vedrà. There is no place for sadness, or fear, or indifference.
I go and complete the mission, crawling under the plants and stepping down the rocks. I cricle around the base, watching our final conquest as if it is the first time. I hesitate a full minute before touching its sand-colored bricks. What if the world can exist only as long as nobody has touched all the seven towers of Eivissa?

The sun is setting.

There are actually nine towers in Eivissa. Two were integrated in the churches of Sant Antoni and Santa Eularia as the years passed. The one in Sant Antoni is the only one with a square base. Four more in Formentera. One in S’Espalmador, but the island is a national park and cannot be explored. Forty-eight more were spread around the Pitiüses, built by natives in the inner parts of the islands. Some of them don’t exist anymore, but the majority is still there. They are barely big enough to fit a family of four inside.